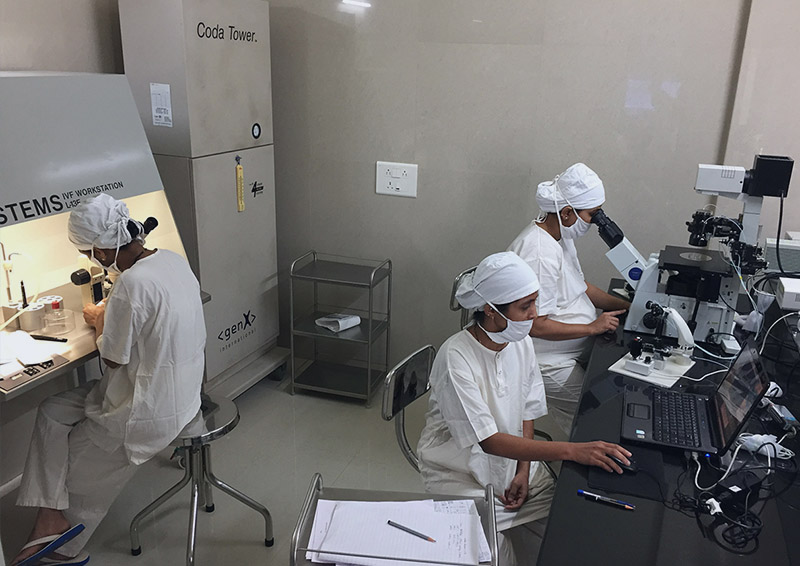 How Is Female Infertility Treated?

Female infertility can be treated in several ways, including :

Women who have been diagnosed with tubal or pelvic disease can either undergo surgery to reconstruct the reproductive organs or try to conceive through in vitro fertilization (IVF). Using a laparoscope inserted through a cut near the belly button, scar tissue can be removed, endometriosis treated, ovarian cysts removed, and blocked tubes opened.

A hysteroscope placed into the uterus through the cervix can be used to remove polyps and fibroid tumors, divide scar tissue, and open blocked tubes.

Women suffering from ovulation problems may be prescribed drugs such as clompiphene citrate (Clomid, Serophene) or gonadotropins (such as Gonal F, Follistim, Humegon and Pregnyl), which can lead to ovulation. Gonadotropins can induce ovulation when Clomid or Serophene do not work. These drugs also can enhance fertility by causing multiple eggs to ovulate during the cycle (normally, only one egg is released each month). Gonadotropin therapy may be offered for unexplained infertility or when other factors have been corrected without resulting in pregnancy. Metformin (glucophage) is another type of medication that may restore or normalize ovulation in women who have insulin resistance and/or PCOS (polycystic ovarian syndrome).

Intrauterine insemination refers to an office procedure in which semen is collected, rinsed with a special solution, and then placed into the uterus at the time of ovulation. The sperm are deposited into the uterus through a slender plastic catheter that is inserted through the cervix. This procedure can be done in combination with the previously listed medications that stimulate ovulation.

IVF refers to a procedure in which eggs are fertilized in a culture dish and placed into the uterus. The woman takes gonadotropins to stimulate multiple egg development. When monitoring indicates that the eggs are mature, they are collected using a vaginal ultrasound probe with a needle guide. The sperm are collected, washed, and added to the eggs in a culture dish. Several days later, embryos -- or fertilized eggs -- are returned to the uterus using an intrauterine insemination catheter. Any extra embryos can be frozen for later use, upon the consent of the couple.

Intracytoplasmic sperm injection is used when there is sperm-related infertility. The sperm are injected directly into the egg in a culture dish and then placed into the woman’s uterus.

Egg donation helps women who do not have normally functioning ovaries (but who have a normal uterus) to achieve pregnancy. Egg donation involves the removal of eggs -- also called oocytes -- from the ovary of a donor who has undergone ovarian stimulation with the use of fertility drugs. The donor's eggs are then placed together with the sperm from the recipient's partner for in vitro fertilization. The resulting fertilized eggs are transferred to the recipient's uterus.

Medical therapy and in vitro fertilization can increase the chance of pregnancy in women diagnosed with unexplained infertility.

Factors that cause female infertility

How Does Age Affect Fertility?

Women are born with a finite number of eggs. Thus, as the reproductive years progress, the number and quality of the eggs diminish. The chances of having a baby decrease by 3% to 5% per year after the age of 30. This reduction in fertility is noted to a much greater extent after age 40.

Female infertility can be also be caused by a number of factors, including the following :

How Is the Cause of Infertility Determined?

If male infertility is suspected, a semen analysis is performed. This test will evaluate the number and health of his sperm. A blood test can also be performed to check his level of testosterone and other male hormones.

If female infertility is suspected, your doctor may order several tests, including:

In those patients with testicular cancer and in men who stay away from home for long periods, sperm freezing facilities are available. Sperm freezing is also done for donor samples.